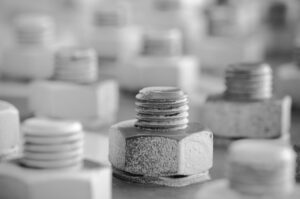 In North America there is the Unified Screw Thread, which come in both fine and coarse – the thread is measured in TPI (Threads per Inch)

For metric bolts there is the ISO Metric Screw Thread, which also comes in both fine and coarse – the thread is measured according to its Pitch which is the spacing between the individual threads.

For structural applications the Coarse thread is used almost exclusively as it’s easier to tighten and carries a reduced risk of cross-threading. It will also lend itself to a greater variety of coatings.
Bolt Diameters are always denominated according to the shank diameter