Gravity Loads or Static Loads are essentially what you would imagine, stationary loads imposed by gravity, which can be divided into 2 sub-categories which include Dead and Superimposed Loads:

Dead Loads: include the self-weight of the structure including all items that are permanently connected to, and forming part of the structure, including, walls, roofs, exterior finishes, also permanent mechanical equipment including, plumbing and electrical services, air conditioning, elevators, etc. In fact, anything that will be in place during the expected lifespan of the building. Such loads may be classified as either ‘Point’ or ‘Uniformly-Distributed’ (UDL)

Superimposed Loads: are also vertical loads imposed by gravity, but unlike static loads, are transient in nature, that is to say, inanimate objects that are not connected to, or forming part of the structure, which may be moved around and relocated according to the requirements of the occupants. Examples of such loads include, furniture, moveable partitions, office equipment, etc.

These loads are known as the ‘Occupancy’ of the building and are usually pre-determined by regional building codes and regulations depending on the nature and intended use of the structure. Such loads are nearly always determined to be ‘Uniformly Distributed’ (UDL) and are expressed in terms of (kg / m2) or (lbf / ft2).

Note!
The term 'Superimposed' is considered by some to be irrelevant - loads falling into this classification may also be referred to as Live Loads which would then include Ice, Snow and heavy rain.

When considering gravity loads in isolation, the horizontal beams would be selected to resist bending so as not to deflect beyond acceptable limits.

For more information on simply-supported beams go to  Beams, or if you would like to know more on beam selection, check out the Rules-of-Thumb

The columns would be axially loaded and selected to resist the compression forces without buckling.
For more information on columns and how they are selected go to Columns

The connections between beam-to-beam and beam-to-column would be would be theoretically 'Flexible' offering no moment resistance and would be designed to resist vertical shear forces only.
For further information on these go to Flexible Connections

In the real world however, very few structures would be designed to resist gravity loads only, they will always be subjected to some form of dynamic influence which may be caused by Mechanical (Live), Wind, or Seismic forces 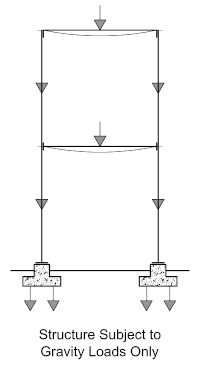 Point loads are static loads usually bearing directly onto the horizontal beam, such loads create bending in the supporting beam, the magnitude of which is a function of the mass of the imposed load and its distance from the center-span. Bending will be at its greatest at center-span.

Uniformly Distributed Loads (UDL) may be either static or superimposed and are spread over the wider floor area by means of a horizontal diaphragm, which typically would be either a concrete or steel floor.

Horizontal diaphragms are discussed in 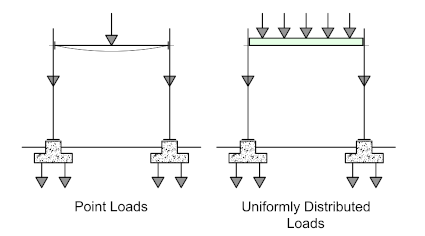