The earth’s surface is made up of numerous tectonic plates which are constantly in motion relative to one another pushing one against the other. These points of contact are known as the ‘Fault-Lines’, and when the pressure of the contact reaches a certain level, something has to give, resulting in a violent and sudden slip. This slip releases an enormous amount of energy which is transmitted through the crust as seismic waves causing the ground to shake and vibrate, often violently.

After an earthquake strikes, P waves ripple through the ground first, followed by the S waves, then come the much slower Surface waves – what geologists refer to as Love and Rayleigh waves. Both of these wave forms move the ground horizontally, but Rayleigh waves may cause the ground to move vertically as well.

It’s the horizontal seismic waves that cause most of the damage causing lateral accelerations measured in G-forces. A magnitude 6.7 earthquake can produce an acceleration of 1-G and a peak velocity in excess of 100 mm/sec. Such a sudden violent movement can cause huge stresses on the building’s structural components, and if not properly allowed for, can cause serious structural damage.

Another consequence of earthquakes is the phenomenon known as Liquefaction, which occurs when sandy, waterlogged, or loosely packed soils temporarily behave like liquids, resulting in a quicksand effect, causing the ground to sink and slide, potentially causing the structure to ‘sink’.
Engineers must choose their sites carefully! 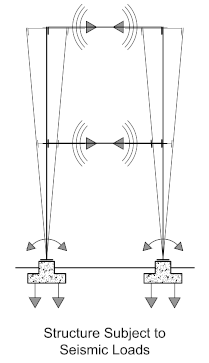 Seismicity should not be confused with ground subsidence – subsidence is related to the ground moisture content underneath the foundations. Certain ground types are more susceptible than others.

Cohesive ground, such as clay and silt are particularly vulnerable since they shrink and swell in relation to their moisture content. This means that the weather can have an enormous impact on their composition.

Non-cohesive ground, like sand and gravel, are less susceptible to shrinkage and growth, but they are more susceptible to being washed away by an ingress of water.

Ground movement caused by vibration resulting from heavy road traffic or nearby construction work can also create subsidence by loosening the ground strata beneath the structure.

Avoidance of the effects of subsidence comes down to the design of the foundations which must take into account all of the above conditions.