Fillet welds are usually applied when welding Tee joints where the plates are located at between 60 and 120 degrees to each other, 90 degrees being the most common. A Fillet weld is created when the weld forms a fillet between the faces of the adjoining parts, known as the fusion faces. The fusion zone refers to the heat affected area of the fusion faces, otherwise determined as the weld penetration.

Fillet welds are usually designated by the weld ‘leg’ and weld ‘throat’. When calling up a Fillet weld on the drawing the weld size is given by the leg length (L) while the throat (T) is measured at right-angles from the weld face to the root. The throat thickness will vary according to a number of factors depending on whether the weld face is flat, convex, or concave 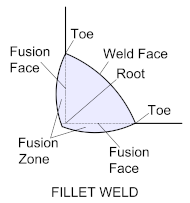 Another factor that determines the weld throat dimension is the angle of intersection of the plates to be welded, which may vary between 60 and 120 degrees

In such cases the leg length is taken as the lesser of the horizontal or vertical, while the throat, as before, is calculated at 90 degrees from the weld face to the root.

Fillet welds may be either continuous or intermittent, in the case of intermittent welds the weld length should not be less than 4 x the leg length or 40 mm. whichever is the greater.

The spacing between the welds is determined by the total weld length required. Intermittent welds generally should not be used when the metal is exposed to the outside elements where corrosion is a possibility, or when the joint may be subject to fatigue stresses.

The following limits are suggested by the American Welding Society