Electric arc welding as applied to structural steel fabrication is almost invariably carried out by one of the following processes:

Where the electrode is hand-held and manually fed into the weld pool. No shielding gas is used, but a flux is incorporated as a coating to the electrode.

This is one of the most commonly used processes, its advantage being its flexibility as it can be used in almost any of the welding positions. 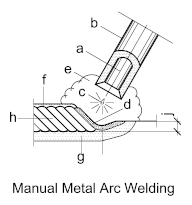 Traditionally it has been regarded as the method producing the highest quality welds, but this reputation is being threatened by the advances in other welding processes.

Automatic, with a continuous coated Electrode

This is the automatic equivalent of the manual metal arc process, but instead of the electrode being hand-held it is stored on a drum and incorporated into a continuous automatic feed system.

To prevent the flux breaking away from the coiled electrode, ‘spin-wires’ are helically wound around the outside of the flux which acts as the electrode, while the central wire is not energised.

This is sometimes called Metal Active Gas (MAG), CO2, or Metal Inert Gas (MIG) welding, although the last term is properly applied when the shielding gas is Argon or Helium, the gasses used for welding non-ferrous metals.

In this process the bare electrode, welding arc, and weld pool are protected only by the gas shield, generally, there is no flux. A flexible hose supplies the welding gun with electrode wire 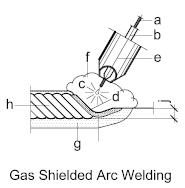 coiled on a drum, with the shielding gas, electric current, and consumables being controlled automatically. The shielding gas is usually Carbon Dioxide, sometimes with a small addition of Argon when Carbon and Carbon/Manganese steels are being welded. The gas emerges from the annular opening directly around the electrode.

A common variation of this method is to use a flux coated wire, where the electrode wire has a tabular cross section and contains a central core of flux. The flux incorporates arc stabilisers, de-oxidants, and alloying elements. Sometimes it also contains constituents that emit Carbon Dioxide, in which case it is possible to dispense with the shielding gas.

The mode of metal transfer from electrode to weld pool varies with the welding current. At low currents, the electrode will dip into the weld pool causing a short-circuit and consequent melting of the wire tip, this is called ‘dip-transfer’. At higher currents, the arc is continuous and the plasma stream from the electrode to the workpiece transfers a spray of molten metal, this is called ‘spray-transfer’. Recent developments include a ‘pulsed-current’ welding plant which controls the molten metal transfer more closely, one or two metal droplets being transferred with each pulse of high current.

When the gas shielded welding gun is hand-held the method is considered to be semi-automatic, because, although the welding consumables are automatically controlled, manipulative skill is still required. However, this method can be readily incorporated into a fully automatic process, its particular advantage being that it can be used for many types of positional welding. Its finding increasing application in production engineering employing robotic systems

As its name implies, this process utilises an arc which is entirely submerged in a granular flux. Because of this, high currents can be used without the danger of air entrainment or spatter.

Depositions rates for this process are considerably higher than for either manual or CO2 welding. They can be increased further by using two or three electrode wires in the same weld-pool, sometimes with the addition of a further ‘hot-wire’ 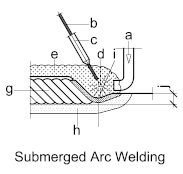 (a wire that is not electrically charged, but is heated and introduced into the weld-pool independently of the electrode wires)

This process is normally incorporated into some form of fully automatic system, where either the workpiece is moved, as in the circumferential welding of pipes, or the welding plant is mounted on a tractor-unit, as would be used for butt-welding between flat plates.

The weld quality is normally very high because there is no reliance on manipulative skill. Weld appearance is good, partly because of the automatic nature of the process, and partly to the smoothing and containing nature of the fused slag. The high current also produces greater penetration than other processes.

There are two principle disadvantages to the submerged arc welding process:

Firstly, because of the granular flux, it can be used only in horizontal welding positions.

Secondly, because of the high deposition rates, weld metals of low toughness may be produced because the associated low cooling rates lead to a large grained microstructure. However, post-weld heat treatment may alleviate this.

This automatic process is used for the butt-welding of thick plates in the vertical, or near vertical positions. The square-edged plates are positioned with a large gap of about 30 mm between them, and no special preparation is necessary.

A very large weld pool is created, contained on two sided by the plates that are being welded, and on the remaining side by two water-cooled copper shoes. One or more of the electrodes are fed automatically from the top of the joint into the weld-pool. The flux is conductive in its molten state, and once it has melted 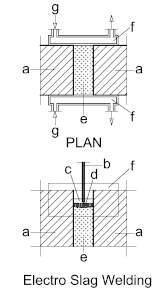 the process ceases to be an arc-welding process since the arc is extinguished. The heat input arises from the electrical resistance through the electrode and the conductive flux.

Because of the high heat input and large weld volume, cooling rates are low. A course grained microstructure with poor fracture toughness is produced, which may require post-weld heat treatment.