End Plates are probably the most versatile of all the flexible Connection types in that the may be used to connect beam-to-beam and bean to columns, both to the flange and web. They can also be used for skew connections at any angle.

End-Plates are cut from Plate or ‘Flats’ which are drilled or punched to the required bolt-patterns and shop-welded to the beam-end web. The End-Plate is welded longitudinally to the beam web on both sides which should not be continued across the top and bottom of the plate. They do have a tendency to ‘bow’ due to weld shrinkage, but provided the curvature is moderate it should not cause a problem as the plate will usually pull straight as the joint is tightened during erection.

The shear resistance of the End-Plate is determined by the strength of the Fillet weld between the plate and the beam-end web, generally a 6 or 8-mm fillet-weld will prove adequate.

Welded End-Plates are the most economical in terms of material usage and lend themselves to a very high level of standardization. They also have the advantage of being adapted to skew connections which makes them so popular.

But their main drawback is that they can sometimes be difficult to erect as there is little room for site adjustment. Consequently, they must be fabricated to a high level of accuracy. 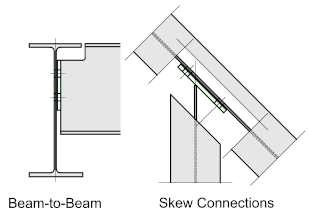 They can sometimes be tricky when erecting a beam between two existing beams, where its necessary to swing the beams into position – the edges of the end-plate may interfere with the existing beam webs. For small beams this is rarely a problem, but as the beam becomes larger the problem may become apparent.

To avoid an accumulation of tolerances in such conditions, particularly when a string of beams form a continuous run, its common practice to detail each 4th or 5th beam 5-mm shorter and compensate with ‘finger-packs’

There are basically 3- end plate types, they include: Partial Depth, Extended Depth, and Full Depth

Partial Depth End-Plates should not be less than 0.6 x the beam depth, if the beam is notched top and bottom, then the End-Plate should extend the full depth of the web between the notches. Many designers don’t like to use end-plates with double notch beams, especially thin-web beams, preferring instead to use either stiffened plates or Cleats.

The end-plate is welded to each side of the beam web and should not be welded horizontally across the top and bottom.

Partial depth end-plates should not be used with Wide-Gauge bolt-centers.

Extended-Depth End-Plates are welded to the web and bottom flange of the beam and should be considered when using Wide-Gauge bolt-centers, or when the load is such that a Partial-Depth End-Plate proves inadequate.

Full-Depth End-Plates would typically be used for beam-to-column connections, as there is no provision for a notch, they lend themselves to ‘gusset-plates’ where vertical bracing is required.

Extended and Full-depth End-Plates are not as flexible as the Partial-Depth and will offer some moment resistance – but provided the plates are thin enough and used with Wide Bolt Gauge, they will usually fulfil the requirements of a Pin-Ended connection

When the end-plate is attached to a channel section the same types apply, but the one difference is that the end-pates may be Full or Half Width.

A Full Width end-plate should be set out so that the bolt-hole gauge is equal about the heel of the channel.

A Half Width end-plate should also be set out so that the gauge is measured from the heel of the channel - the gauge itself would be the normal gauge / 2. With this end-plate type there are two options:

Option 1 - is to set out the end plate so that it protrudes from the heel of the channel by approximately 10 mm. allowing for a double sided weld - or alternatively,

Option 2 - is to set out the end-plate so that in intrudes into the heel by approximately 5-6 mm, again, allowing for a double sided weld.

End Plates, being so adaptable can be ada[ted to connect to virtually any column size without too much difficulty.

When connecting to the column flange, the gauge will be determined by the recommended (or Workable) gauge of the column. When we look at Standardizing the Connections, it will be found that the Narrow and Standard recommendations will comply with the column gauges.

Connecting to the column web will be slightly different because the maximum end plate width must be less than the depth of the column web when measured between the root radii (hw). Columns less than 200 mm. deep will probably need an end-plate narrower the the recommended standard - column above 200 mm will (in most cases) be able to accomodate the Standard End-Plates. If the flange width of the incoming beam is greater than the distance between the column flanges, the the Flanges will need to be notched - see Notches

Alternatively, you can weld a flange plate across the toes of the column flange and connect the end-plate.

Dimension (d1) is the distance between the top of the beam flange and the top of the cleat. In most cases (d1) will equal the notch depth, but there are circumstances where they will differ - which we'll look at.

(e1) is the vertical edge distance which should not be less than 2 x the bolt diameter. 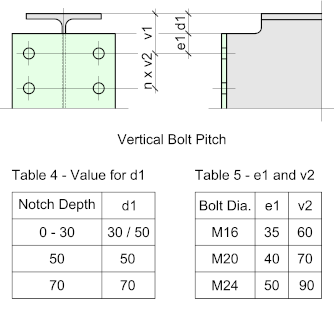 There will be instances when two adjacent beams with different calculated notch depths connect to a common web thus sharing bolts. In such cases, the cleat may be lowered (on the smaller beam) to match that of the greater. Alternatively, the notch may be deepened.

It will be found that a great majority of Notch Depths will fall into the 0 - 50 mm range - so though this will always be a consideration, it should never be a major issue. 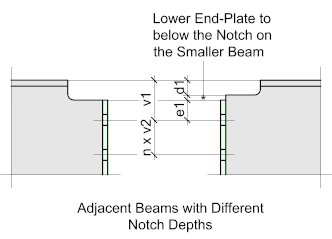 End Plates have been standardized according to Standard and Wide Gauges. Wide Gauge end-plates should not be used with Partial Depth end plates.

M16 and M24 bolts are hardly ever used for end plate connections, M20 being the de-facto standard. 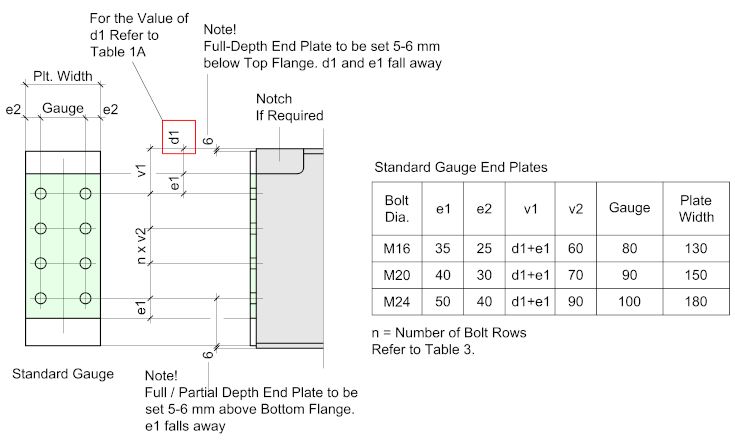 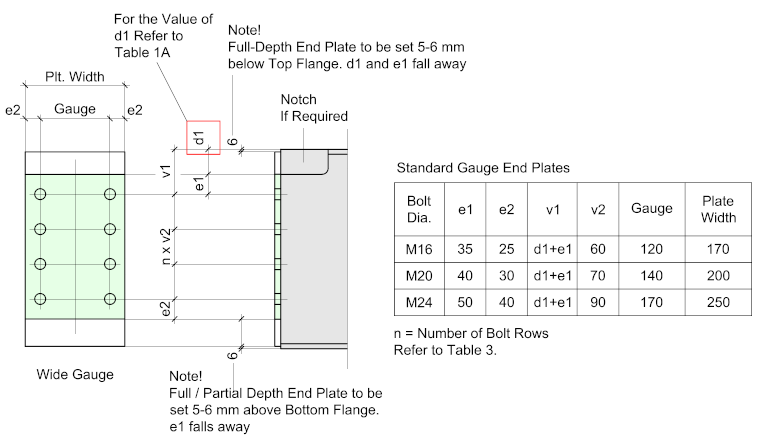 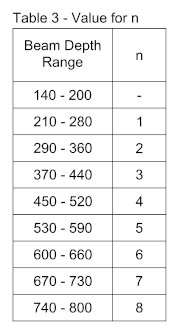