Welded Fin-Plates, like End-Plates are cut from Plates or standard ‘Flats’ which are then drilled or punched to the required bolt pattern and shop-welded to the web of the supporting beam. The connecting beam web is match-drilled in the workshop to suit.

Fin-Plates are not strictly flexible in the vertical plane, and as a consequence the fillet-weld should be full-strength with a minimum throat thickness of 8-mm. and the edge-distance from the edge of the plate to the center of the bolt-hole should not be less than 2 x the bolt diameter.

Fin-Plates are becoming increasingly popular due to their relative ease of erection and the absence of ‘shared-bolts’ commonly associated with End-Plates and Cleats. But they do require, like End-Plates, a high level of accuracy when fabricating as there is little room for site adjustment. Additional adjustment can be allowed by slightly slotting the holes horizontally, but many engineers are not completely in favor of doing this, so check first.

As popular as these connections are becoming, they do have limitations. Generally, Fin-Plates are not suitable for large, heavily loaded connections, or where they may be subject to vibration. Neither are they generally used for beams with a depth of greater than 600-mm, where they are, the beam depth-to-span ratio should not exceed 20;1 to limit deflection, and the vertical distance between the extreme bolts on the plate should not exceed 530-mm.

Generally, long-span beams should be restrained laterally as close to the connection as practical to prevent lateral deflection of the Fin-Plate. Should this deflection become an issue, it may be necessary to use a thicker plate, or weld the plate to the beam flange, or alternatively, ‘stiffen’ the Fin-Plate. (See Fin-Plate Stiffening)

Fin-Plates may be configured in a number of ways, they are defined as ‘Long’ or ‘Narrow’, and may have a single, or double row of horizontal bolts. Fin-Plates may be extended to the underside of the top-flange or extended the full depth of the beam forming a full-depth stiffener. (See Fig’s below)

Fig 1 – Illustrates a ‘Short’ Fin-Plate welded to the web of the supporting beam. This represents what is probably the most common configuration.

Fig 2 – Illustrates a ‘Long’ Fin-Plate with a double row of bolts for heavier loaded connections.

Connections illustrated in Figs 1 and 2 will require that the connecting beam be Notched or Coped. (For more information on Notches refer to Appendix 2 – Beam-End Notches or Copes)

Fig 3 – Illustrates a ‘Long’ Fin-Plate with a single row of bolts. Such connections are for light-duty applications where the connecting beam does not require to be Notched.

Fig 4 – Illustrates what could be either a ‘Short’ or ‘Long’ Fin-Plate which is extended to the underside of the top-flange. This connection type is used to stiffen the Fin-plate against lateral bending on heavier loaded connections.

Fig 5 – is not strictly a Fin-Plate but a transverse stiffener which has been drilled or punched to match the incoming beam.

Fig 6 - is a variant of Fig 5 - This connection is for a light duty only eliminating the need for the incoming beam to be notched.

When connecting a beam to the Column Web the detailer must bear in mind that to install the beam it will have to lowered from the top of the column between the column flanges. In order to make the connection the bottom flange of the beam will need to be stripped to allow the beam to pass the fin-plate. If in the unlikely event the beam must pass the fin-plate completely (to connect to a fin-plate below) then both the top and bottom flanges will need to be stripped.

If you don't want to strip the flange then a flange plate may be welded to the toes of the column and the fin-plate welded to that. This will create some eccentricity into the connection, so it should be confirmed with the responsible engineer.

When connecting to the column flange, no such limitations apply. 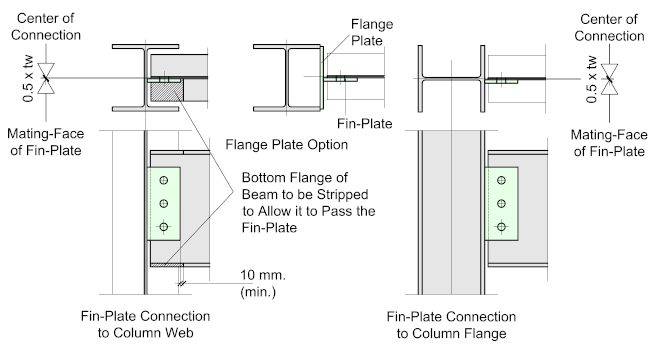 The setting out relationship for the fin-plates and beams are discussed later under Detailing Practice.

Where a ‘Long’ Fin-Plates may be subject to lateral deflection and it’s not welded to the underside of the top-flange,  it may be necessary to stiffen the plate.

For beam-to-beam connections, the most common method in stiffening is to weld a Plate, or Flat vertically to the top and bottom flanges of the supporting beam, the Fin-Plate is then welded to the stiffener

For beam-to-column connections, the stiffener is welded horizontally between the Fin-Plate and to the Toe of the column flange and extend for the full depth of the Fin-Plate.

The stiffener is always welded adjacent to the mating-face. 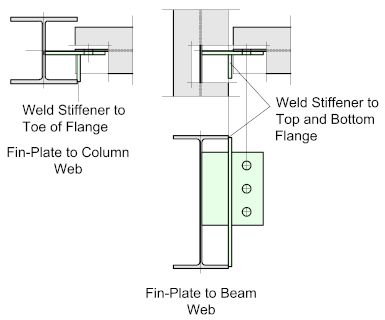 Fin-Plates look straightforward, and indeed they should be, but more drawing office errors occur with Fin-Plates than any other connection type, so for this reason it’s important to pay special attention to what is considered good detailing practice.

When positioning and detailing Fin-Plates on the beam, they should always be dimensioned to the ‘Mating-Face’, which at the risk of being obvious, is the face of the Fin-Plate connecting to the web of the beam and defining the mating-face is probably the single most important part of the detailing process. To do so, requires some thought, and it’s not always as simple and straightforward as you may think. 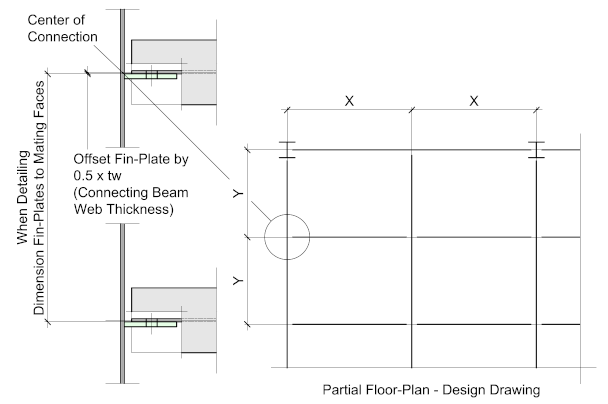 When installing a beam between two existing beams it’s necessary to establish how the beams will be swung into position. There are two possible options:

Firstly – they may be rotated in position about the center-line of the beam, in which case, the mating-faces will alternate from one side to the other (as illustrated below), or:

Secondly, they may be slid into position from one side, in which case the mating-faces will be on the same side.

It may appear that the second option is the clear favorite, but by orientating the Fin-Plates in this manner, the two supporting beams are effectively ‘handed’ meaning they are a mirror-image of each other. The first option on the other hand means that the two supporting beams are effectively the same with only the erection ‘North’ mark being on opposite ends of the beam.

It doesn’t matter which option is chosen, they will both work, provided the mating faces are clearly indicated on the detail drawings with clear instructions to the workshop to mark the faces accordingly. 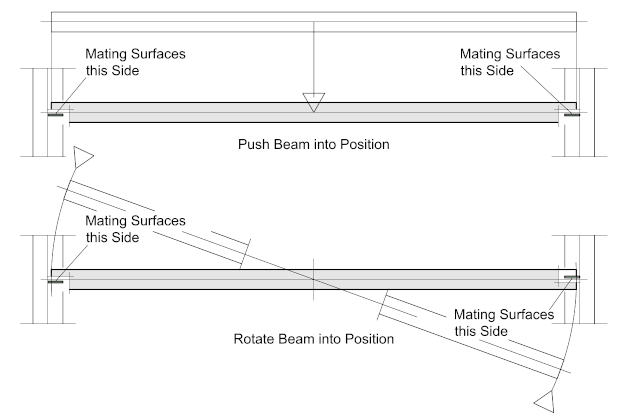 Connecting to the column webs is usually achieved by lowering the beam from the top between the column flanges, in which case it will be necessary to crop the bottom-flange of the incoming beam to allow passage of the beam.

At the risk of repeating the same thing over and over it's worth drumming the point home.