Rigid or Moment Frames seem uncomplicated and straightforward in appearance and resemble simple post and beam construction, but in fact, they are radically different in structural behavior. The best way to describe rigid frames is to compare them with pin-ended braced structures.

The horizontal beams in a braced frame are subject to ‘bending’ when a load is applied vertically - and ‘displacement’ when subjected to horizontal lateral forces, and the connection between beam and column is effectively ‘flexible’. That is to say the beams ends are not restrained and are theoretically free to rotate when subjected to lateral or bending forces, and as there is no moment transfer only vertical shear forces need to be considered. 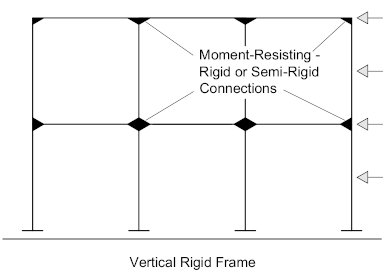 Rigid Connections on the other hand are effectively restrained so that beam-end rotation cannot occur; the joint is configured so that the column will prevent the beam-end from rotating. This restraint means that the beam behaves like a fixed end beam rather than a simply supported one; it has the advantages of increased rigidity, decreased deflections and decreased internal bending moments, but the fact that the column is offering restraint to rotation means that the column must resist bending moments as well as axial forces, thus complicating its design.

This means that instead of the beam end rotating independently of the column, the whole joint will tend to rotate due to the fixed angular relationship between the two, which due to the nature of the connection, will not change. The amount of rotation depends on the relative stiffness of the column and beam, the stiffer the column, the less the rotation.

As a consequence, the column will tend to be heavier than its braced frame counterpart with thicker flanges to resist the bending moments, while the beam may be smaller due to its reduced deflection, but with thicker end-plates.

The advantage of rigid frames is that the structure is not encumbered by vertical bracing which may interfere with windows and doorways thus hindering access, also architectural aesthetics may demand a more ‘cleaner’, ‘uncluttered’ look.

However rigid frame construction tends to be more expensive to fabricate when compared to braced frames and are certainly more difficult to erect due to the tight tolerances involved.