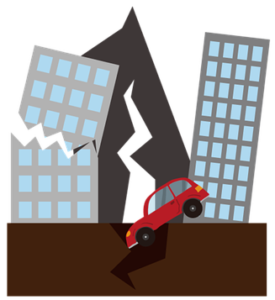 It could be argued that load conditions affecting a steel structure are the responsibility of the engineer, and indeed they are, but it's always a good idea for the detailer to at least have a basic knowledge of them so that he or she can develop a better understanding of how steel structures actually work under these various conditions and how to build up a defense against them.

In this article we'll take a simplified look at these various load conditions, at the end of which it's hoped this better understanding will  improve the communication between you, the detailer and the engineer

These various load cases will impact on the serviceability, stability and integrity of the structure as a whole - they include:

Note that these first two are considered to be Gravity Loads.

These last 3 are considered as Dynamic Loads

Dead Loads: include the self-weight of the structure including all items that are permanently connected to, and forming part of the structure, including, walls, roofs, exterior finishes, also permanent mechanical equipment including, plumbing and electrical services, air conditioning, elevator shafts, etc. In fact, anything that will be in place during the expected lifespan of the building. Such loads may be classified as either ‘Point’ or ‘Uniformly-Distributed’ (UDL)

Superimposed Loads are also vertical loads imposed by gravity, but unlike static loads, are transient in nature, that is to say, inanimate objects that are not connected to, or forming part of the structure, which may be moved around and relocated according to the requirements of the occupants. Examples of such loads include, furniture, moveable partitions, office equipment, etc.

These loads are known as the ‘Occupancy’ of the building and are usually pre-determined by regional building codes and regulations depending on the nature and intended use of the structure. Such loads are nearly always determined to be ‘Uniformly Distributed’ (UDL) and are expressed in terms of (kg / m2) or (lbf / ft2)

Point loads are static loads usually bearing directly onto the horizontal beam, such loads create bending in the supporting beam, the magnitude of which is a function of the mass of the imposed load, the size and span of the supporting beam and the distance of the load from the center of the span. Bending will be at its greatest at center-span.

Uniformly Distributed Loads (UDL) may be either static or superimposed and are spread over the wider floor area by means of a horizontal diaphragm, which would typically be a steel or Composite Concrete Floor 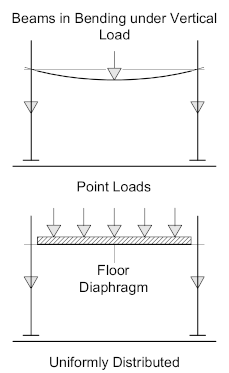 Live Loads are produced by the use and occupancy of the building and may be induced by human activity, vehicles in motion, or operational machinery and equipment.

Live loads may be further categorized as:

The consequence of live-loads is Vibration, the frequency of which depends upon the nature of the live-load.

Wind loads are essentially horizontal in nature and are exerted by wind pressure acting upon the external surfaces of the structure, and like a sailboat, the greater the surface area presented to the wind, the greater the force.

Wind pressure is directly related to wind velocity. At ground level, the wind velocity is virtually zero due to the friction created by the earth’s surface, velocity increases at higher elevations as the frictional resistance diminishes until it reaches ‘Gradient Height’. The gradient height will vary according to local conditions and will usually be specified in local or regional codes, but generally it will be approximately 300 m for flat ground, rising to 550 m for very rough terrain.  At these elevations, the wind will reach its ‘Gradient Velocity’

This increase in velocity means that tall buildings are more susceptible to wind loads, and when you consider that a building is effectively a vertical cantilever anchored at its base, the overturning moment will increase exponentially in relation to its height (d).

The Effect of Wind on Structures

Wind pressure is never constant, the proximity of other buildings or geographical features will disrupt the wind flow causing it to behave in unexpected and unpredictable ways, creating ‘swirling’ and ‘gusting’ conditions which can vary widely according to speed and direction.

This force can affect the structure in any number or ways, lateral displacement can cause the structure to lean or sway causing discomfort or anxiety to its occupants, while in extreme circumstances the entire structure could be subject to overturning.

On the windward side of the structure the wind pressure acts as a positive (or pushing) force, while on the leeward side it acts as a negative (or suction) force.

On horizontal, long-span open structures such as bridges or elevated gantries, the wind passing over, under, and through the structure may cause a form of resonance known as ‘Aeroelastic-Flutter’, which when the frequency of varying oscillations between the high and low-pressure zones matches that of the natural frequency of the structure, they will amplify until they ultimately cause a collapse, a classic example of which is the spectacular collapse of the Tacoma Narrows bridge in 1940

Open-sided structures are particularly susceptible to positive uplift. If the wind flow through the structure is disrupted, or the exit on the leeward side is restricted, positive pressure will increase inside the building, which may cause the sidewalls or roof to ‘pant’, leading to the possibility that they may detach completely.

Generally, this condition is only a problem in industrial buildings where the sidewalls are partially open, with the remainder and the roof being ‘sheeted’ with profiled steel cladding.

To counter the effects of positive-uplift the structure should be designed so as to allow an uninterrupted airflow through the building and ensuring the sidewalls and roof are securely fixed to the steel skeletal structure.

Negative uplift is created by the ‘suction force’ of the wind passing over the structure. Roofs with a sloping profile are generally more susceptible. 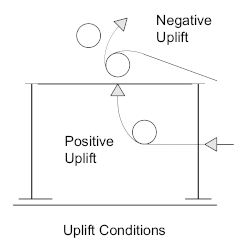 Countering the Effects of Wind

The turbulence caused by wind vortices, particularly on tall structures can be mitigated by either; stiffening the structure, thereby increasing its natural frequency, or adopting the aerodynamic design approach.

The aerodynamic approach is by far the more efficient which today is the most frequently applied approach. One method is to vary the cross-section of the structure by, ‘tapering’, ‘tiering’, or ‘stepping’ over its height, thus disrupting the uniformity of the vortex shedding.

Other effective techniques include; softening the sharp corners of the building, providing openings for the wind to pass through, or adding ‘spoilers’ to disrupt the vortices. An example of which is the ‘Helical Strake’ to be seen on tall chimney stacks.

The impact of wind pressure on structures is now often determined by simulations conducted in wind tunnels where scale models of the intended structure together with local features such as other buildings and obstacles which may affect the wind behavior are observed, monitored, and recorded. 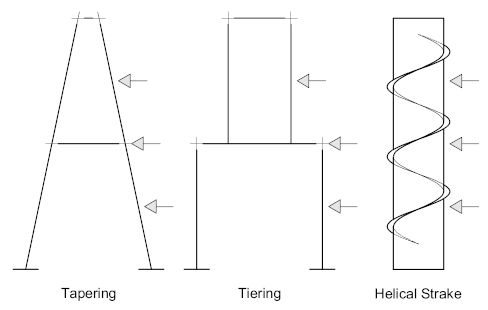 The earth’s surface is made up of 7 major plates which are constantly in motion relative to one another pushing one against the other. These points of contact are known as the ‘Fault-Lines’, and when the pressure of the contact reaches a certain level, something has to give, resulting in a violent and sudden slip. This slip releases an enormous amount of energy which is transmitted through the crust as seismic waves causing the ground to shake and vibrate, often violently.

After an earthquake strikes, P waves ripple through the ground first, followed by the S waves, then come the much slower Surface waves – what geologists refer to as Love and Rayleigh waves. Both of these wave forms move the ground horizontally, but Rayleigh waves may cause the ground to move vertically as well.

It’s the horizontal seismic waves that cause most of the damage causing lateral accelerations measured in G-forces. A magnitude 6.7 earthquake can produce an acceleration of 1-G and a peak velocity in excess of 100 mm/sec. Such a sudden violent movement can cause huge stresses on the building’s structural components, and if not properly allowed for, can cause serious structural damage.

Another consequence of earthquakes is the phenomenon known as Liquefaction, which occurs when sandy, waterlogged, or loosely packed soils temporarily behave like liquids, resulting in a quicksand effect, causing the ground to sink and slide, potentially causing the structure to ‘sink’.

Engineers must choose their sites carefully!

Seismicity should not be confused with ground subsidence – subsidence is related to the ground moisture content underneath the foundations. Certain ground types are more susceptible than others.

Cohesive ground, such as clay and silt are particularly vulnerable since they shrink and swell in relation to their moisture content. This means that the weather can have an enormous impact on their composition.

Non-cohesive ground, like sand and gravel, are less susceptible to shrinkage and growth, but they are more susceptible to being washed away by an ingress of water.

Ground movement caused by vibration resulting from heavy road traffic or nearby construction work can also create subsidence by loosening the ground strata beneath the structure.

Avoidance of the effects of subsidence comes down to the design of the foundations which must take into account all of the above conditions.